Over the past couple of months, it feels like there has been 100x more news about the metaverse than there have been bugs in your code.

It either means your code is great, or it means the metaverse is the next big thing. Either way, in this post, we’ll check out the latter statement and decipher what the metaverse is, how it’s built and who is building it.

Welcome stranger, get in!

The idea of the “metaverse” has been around for a long time and represents a digital layer on top of reality. This layer could take on many forms like a simple browser application on a screen or a fully immersive 3D world accessed through VR headsets, haptic feedback bodysuits, and an omnidirectional treadmill.

With this definition, it becomes clear that the “metaverse” has been around already and you’ve been spending time “in the metaverse”. Think about this for a second, and let it sink…

And now take Slack as an example: a digital space where people gather, communicate, share ideas, and collaborate, in different channels that are open or closed.

Or Twitter: an open digital space where anyone can blast their opinion and get into conversations with strangers and friends alike.

Or GTA Online: an open digital world where you can roleplay and interact with thousands of other players. 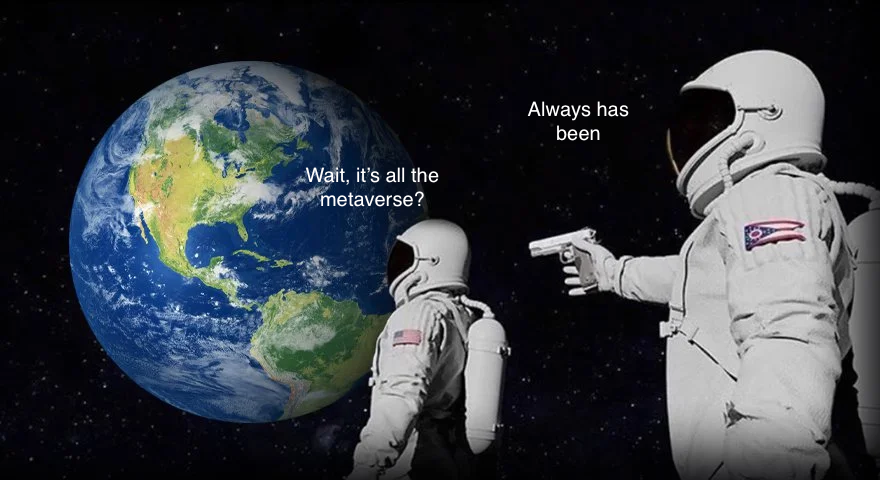 We should think about the metaverse as an interoperable digital layer on top of our lives, consisting of many different smaller worlds – a digital multiverse if you will.

It’S aLl AbOuT tHe ExPeRieNce

What has changed over the past years is the tools we have at our disposal to experience such worlds. Especially the rise of AR and VR glasses, the incredible advancements in the graphic engines, and Web3 technologies like NFTs completely upgrade the way we perceive these digital layers.

The sensory component of the experience is obvious, and it’s only a question of time until the tools that immerse us into the digital realm are comfortable and practical enough to go mainstream. There are many options already today and they will keep improving. Just look at this mind controller, these haptic feedback suits, or this Ready-player-One-style omnidirectional treadmill.

A less obvious part is how Web3 technologies unlock a property of the internet and the digital world that has not existed before: true scarcity, true uniqueness.

The digital realm is limitless. You can create a copy of anything, a million times. Complete abundance. While this is an excellent feature for many reasons, the one thing it does not enable is truly neutral property. You do not truly own your sword in World of Warcaft, nor the skins you bought in Fortnite. Blizzard and Epic, the companies behind these games, own them. They simply rent them to you – and the same goes for your profiles and followers.

Looking back, the clear definition of property rights in the real world fueled its economic development by increasing the incentive to work, save and invest, as well as more effectively allocate resources. This dynamic will likely push forward the development in the digital world as well.

Furthermore, Web3 is open-source, interoperable, and composable by intention. Which is a robust foundation to build a layer on top of our physical reality. Clearly, Web3 technology just came around the corner and still needs time to develop, but its potential is incredible.

If we talk about the future of the metaverse, a crucial aspect is its open or closed nature. The code and platforms are either open-source so that anyone can build upon them (Web3 ethos) or closed silos with centralized power (Web2 standard).

Time will tell which type of metaverse can attract more critical resources to build out the fabrics of their respective worlds.

A concrete example of a closed metaverse would be Facebook’s attempt. Facebook will have complete control over who contributes to the projects, how you have to behave in their metaverse, all the data, who can access their platform, and so on. You get the idea.

An open metaverse on the other hand is built on top and around blockchains which are by nature permissionless, open-source, and uncensorable. To understand this concept better, read this vision statement by Webaverse.

The two ideologies stand in stark contrast and the reality might be something in between both.

Another fascinating factor that could have a significant impact on how we experience the metaverse will be the integration of artificial intelligence.

In a not-so-distant future “NPCs” (non-playable characters) might be hard to distinguish from real humans. Imagine walking through GTA San Andreas and every character could have a normal, almost real conversation with you. Now imagine this experience on an omnidirectional treadmill and a VR headset. Sounds crazy? It is!

And this only looks at AI’s potential to understand and reproduce speech. The possibilities seem endless if we look at the newly released DALL-E 2 AI image generator. It is comparable to the randomly generated planets in No Man’s Sky but on a much bigger scale. An AI that can generate hyper-realistic worlds on the fly, tailored to your individual wishes?

Now when it comes to building today’s immersive metaverse applications, we can compare it to game development with the following three steps in mind:

This means we need design tools, as well as SDKs and game engines that enable interactions.

Because of the multiverse nature of the metaverse, it is hard to pinpoint one stack that rules them all. It will always be a combination of many different parts.

Generally, we can look at this graphic to conceptualize everything that needs to work together to provide us with metaverse experiences: 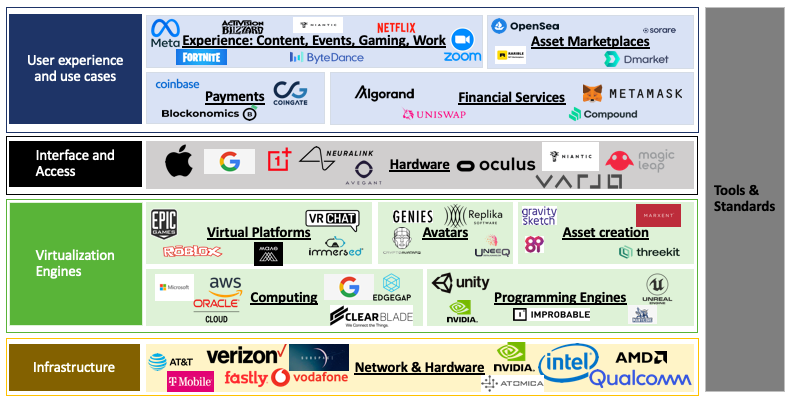 As another example here’s how Microsoft defines its metaverse technology stack: 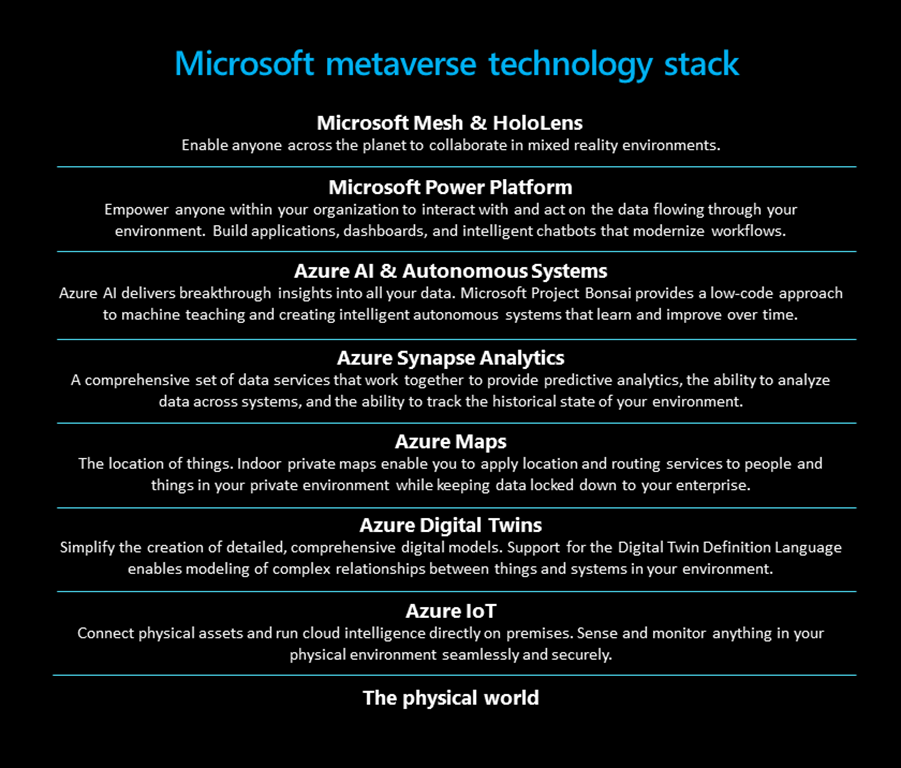 Another example would be the Oculus SDK which includes game engine-specific kits, sound packages, and sample assets. Then there are also tools like Google VR SDK or Nvidia's Omniverse platform.

To sum it up, we can also take a look at the underlying programming languages:

Many companies are hiring in this space and obviously, the big names are pushing hard to build their teams (or armies?).

Facebook plans for example to create 10.000 jobs in the EU to build, among others, their metaverse. Naturally, as the hype is only getting started, there are openings in almost any company that claims to be working on metaverse applications.

In that sense, an approach to the topic could be to start by looking at the aforementioned companies building the tools and engines like Unity (1000+ open positions), Epic Games (202 open positions only for Data & Analytics, Engineering, and QA alone), Microsoft, Nvidia, and so on. They should be simple to find as they are usually relatively bigger organizations.

And then there are the smaller projects that are just starting to build new, digital worlds. Here we can take a look at the Web3 space and find projects like oncyber.io, Webaverse, Decentraland.org, Sandbox.game, and pax.world which are all building some sort of metaverse. The best way to contribute is often to simply join their Discord and ask around how you can contribute.

And finally, there are of course also a lot of opportunities in the hardware space, as the immersion technologies continue to get better and better. We are talking about big companies like iTechArt, Apple, Oculus VR, HTC, and Samsung, as well as more niche companies like the omnidirectional treadmill builders Omni or Aperium for example.

This article was written for nexten.io by Jacques Weniger from neon internet. 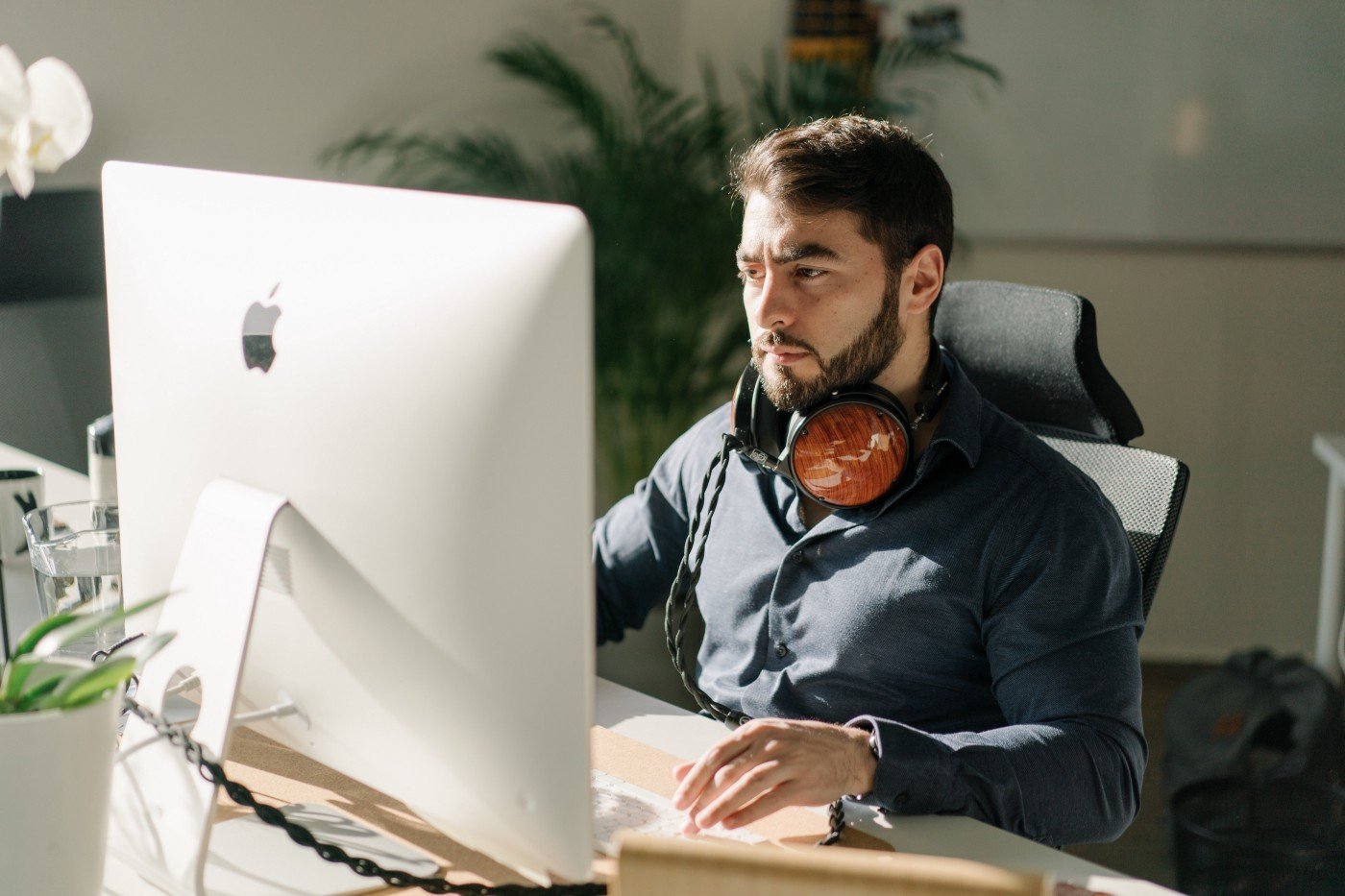 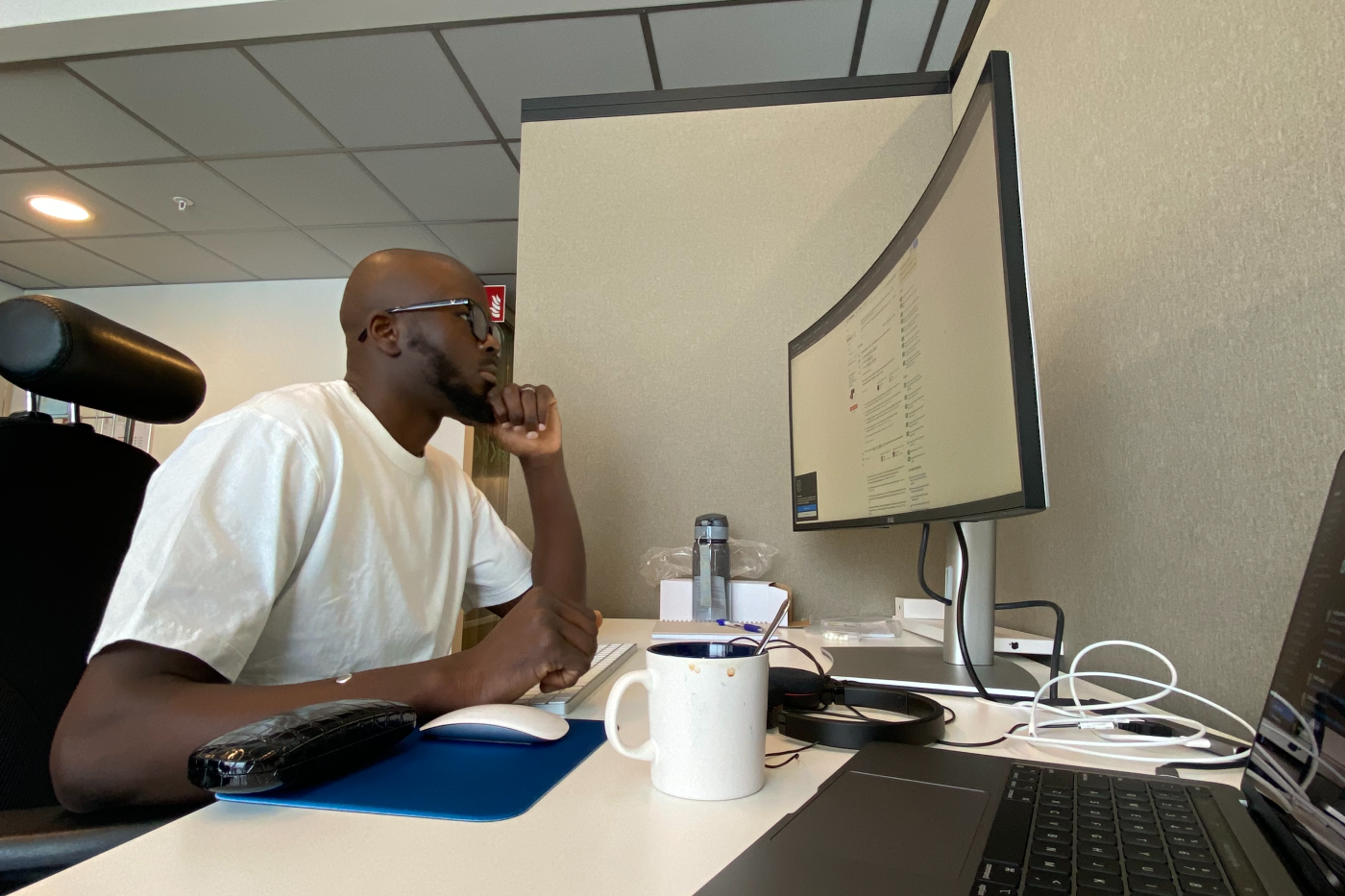 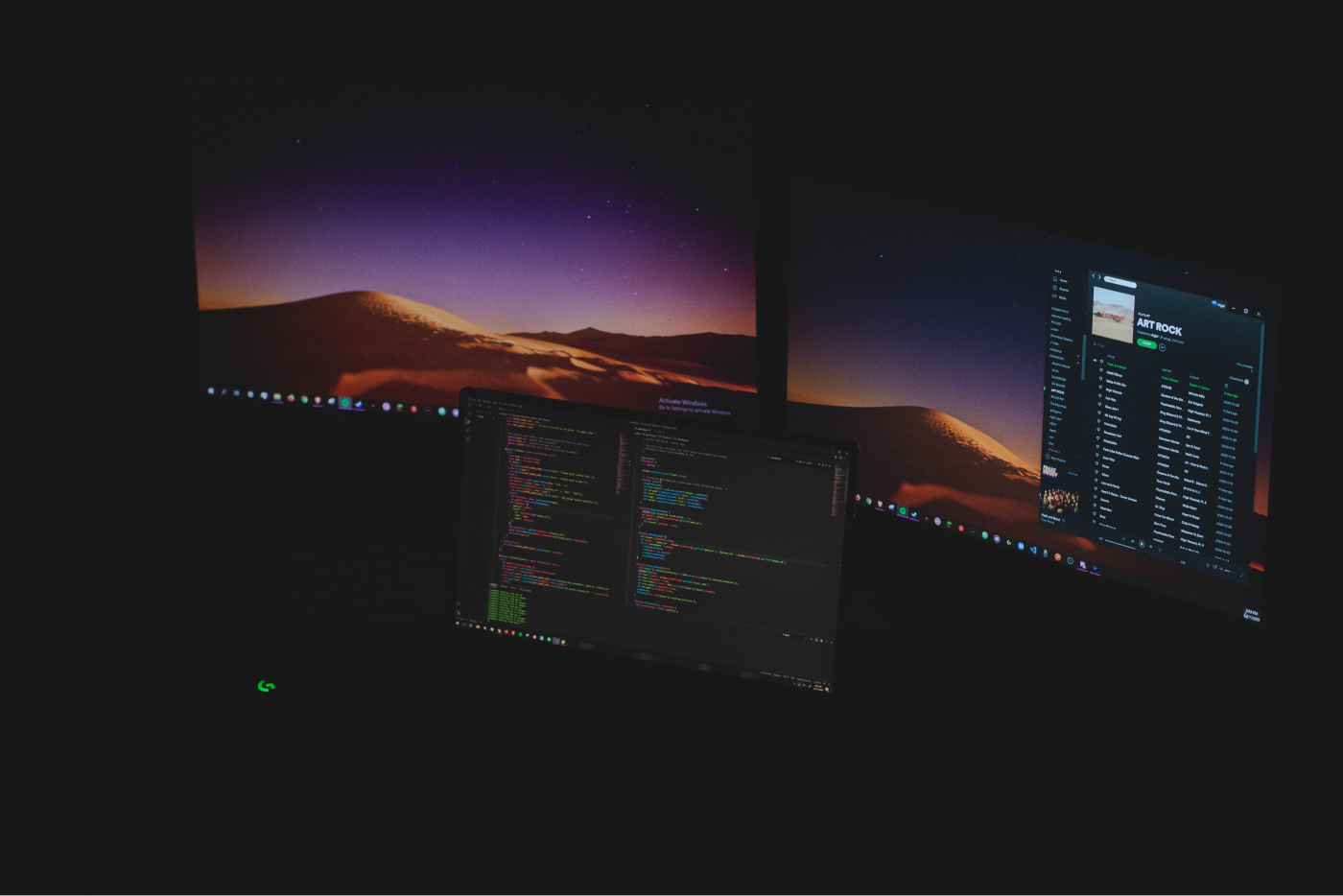